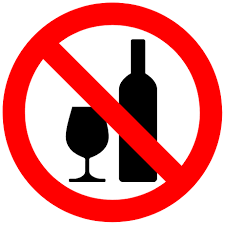 I used to go out a lot to bars, parties and events before I got married and had a son. Not that you have to stop having fun or cutting loose once in a while when you get married and have kids but it does change your priorities and budgetary plans. I also happen to work with several people that are younger than myself(I am the old man at work 34). Some things that are to me now and back than common sense or just common knowledge don’t seem to be so as I say to my son when he starts to throw a tantrum come here and let me drop some knowledge on you.

If it rhymes its probably right, everybody over the age of 30 probably had the same drinking rhyme pop into there head “Beer before liquor get sick quicker, Liquor before beer and your in the clear!” well that one has been around a long time and its false alcohol effects everyone differently but hard liquor or mixed drinks are far stronger than beer by the time you usually decide to switch to beer you are already drunk enough to get sick and that is just throwing more liquids into the already weakened stomach.

This one seems obvious every time its said but we all forget it. Drink water for every drink of alcohol that you had. This will help keep you hydrated since alcohol is a diuretic. Most of the symptoms of a hangover are caused by dehydration. Gatoraide is also a good thing if you haven’t drunk enough water the night before it helps with the dehydration and also replenishes the electrolytes that you lose during the night before.

A greasy breakfast, loads of coffee and Tylenol. Sounds like a plan and so many people do this one and 2 out of 3 parts are fine.

The greasy breakfast has anti-oxidants that help repair your liver and recover from the hangover as well as the salts in the greasy bacon or sausages help replenish your electrolytes.

The coffee also has anti oxidants and caffeine is a stimulant that simply help you mentally recover but it can increase the dehydration so water is more important.

Tylenol is bad yes while it does lessen the pain it is hard on your liver that’s already not happy about the current situation as well as in combination with coffee and several enzymes in greasy food this causes an enzyme to be produced by your liver that actually increases the chances of liver scaring. Scarred liver tissue does not regenerate like unaffected tissue so keep that in mind. Ibuprofen family drugs do not cause this but again they are also hard on you stomach.

Moderation is the best answer I won’t say not to drink since you may never come back here if I do and it will probably get ignored.

A dill pickle this was a mystery to many people but alot of the same reasons as the greasy breakfast apply pickle are cucumbers that have been put into a brine solution brine is salty water and salt is electrolytes as well as being packed with vitamins.

Vitamin B2 Thiamine is a good thing to have in a multivitamin since it helps your liver repair.

Don’t Drink to excess I felt it needed to be said again.

I’ve heard hare of the dog which now seems to have turned into don’t stop and keep drinking well into the next day usually a Sunday I work weekends so this has never been practical for me and well thats just going to turn a morning hangover or a 1 day hangover into a 2 day hangover or trip to hospital so please use a little of the aforementioned common sense.

Vodka a red bull has been a popular drink at night clubs for people who want to be fully awake drunks. The caffeine and sugar get your system to metabolise the alcohol faster and you start to feel the effects faster but the theory is that the caffeine will sober you up. This will most likely and has for several people increase your risk of a heart attack like right now. This has been the reason when you order a redbull vodka they don’t mix it for you anymore at bars they hand your a glass of redbull and a shot of vodka. In some jurisdictions it is against the law or the bar is responsible if they mix it but if you do it hey its your heart attack.

I think those are some good starting points and tips I hope you pay heed to my words.