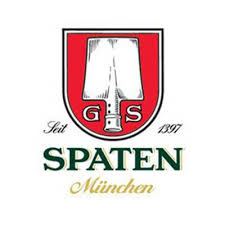 Anheuser-Busch InBev family of companies it was first founded in 1397 in Munuch by Hans Wesler of the Wesler Prew over the next 125 years the brewery changed hand many, many times notably in 1622 when the Spatt family purchased in 1622 and brewed under the name of Oberspathbräu this eventually became Spaten which means spade in German. A couple of owners down the road it came into the hands of Gabriel Sedlmayr who at the time (1807) was the brew master of the royal court. At that time it was also the smallest brewery in Munich as of 1867 it became the largest brewery in Munich and won a gold medal at the Paris World Exposition.

Gabriel’s son Johann, Carl and Anton take over the brewery from there father in 1874 and a little later adopt the logo which is currently used today which is an image malt shovel. The company went through several evolutions and amalgimations with Franzikaner jointly trading stock and Löwenbrauerei.

Export was stopped during the second world war as the brewery was damaged during Allied bombing raids. The export to Europe and overseas resumed in 1950 and in 1992 Lowenbraurei and Spaten merged together and were acquires by InterBrew in 2003 which became InBev in 2004 when AmBev and InterBrew amalgamated. Spaten is now one of the largest brewery in Bavaria producing 2.4 million hectoliters.

The beer is a Munchen and is currently brewed in accordance to the Bavarian Purity law of 1516. It has a bit of a malty smell with a pale golden colour while being extremely clear to look through. Nice and creamy head that retains well. It is smooth crisp and obviously been perfected over a long time. I have nothing bad to say about this beer and I can understand why the company brews and Oktoberfestbier.