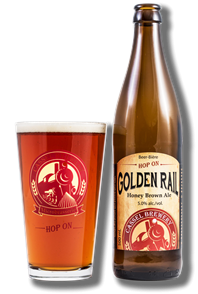 Cassel Brewery is a craft brewer from Casselman, Ontario I first tried it at a food festival in the Alfred, Ontario area. The beer on the Quebec side of the festival was like 5-8 tickets per ½ glass of beer and the vendors were rude. Cassel Brewery and Beaus were on the Ontario side and doing their tasting 1 ticket per full glass and they were pretty awesome people manning the booths. This was a few years ago.

Golden Rail Honey Brown is a Honey Brown Ale with a nice smooth and distinctive taste.  You can taste the honey and caramel right off with some hoppiness and a little bitterness in the finish it’s a very well balanced and tasty beer.