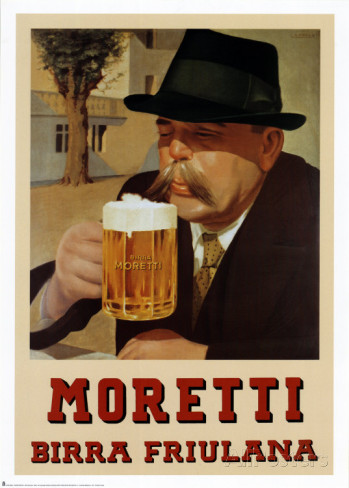 Birra Moretti started out as Luigi Moretti’s Beer and Ice factory in Udine Italy in 1859. This is a fairly important time in Italy’s history because this was when the unification movement to create what is now Italy was coming to a head. The first Italian war of independence was 11 years before and the second war of independence was the same year as the breweries founding. Udine and surrounding areas were currently annexed by the Austrian-Hungarian Empire. The Austrians had the town garrisoned and due to popular uprisings kept there cannons in the town square. Luigi Moretti came from a merchant family and already had dealt in wines and spirit as well as grains and hard goods. He founded the brewery and used what was cutting edge technology at the time to produce it. The brewery was based in the Fruili region until the 1990’s. The brand has since been acquired by Heineken it has won Gold and Silver medals at The Beer World Cup and was the only Italian brand to do so at the time.

Nice golden colour not too much of a smell to it. Very smooth it would be good on a hot day. A little bit of a hoppy finish and a fruity aftertaste overall it’s a very refreshing beer. I had this in Babbos in Manotick, Ontario it went very well with their lasagna as a pairing which was phenomenal btw. It’s tucked beside a small cafe and a Vietnamese take out place.